Simon Kretschmar (35) is one of just five people to receive a heart-lung donation in Germany last year. So far this year, the HDZ NRW has already performed one heart-lung transplant.

"A heart-lung transplant is a rare surgical intervention which becomes necessary when a patient has a life-threatening disease and other treatments are no longer an option", said Senior Physician Dr. André Renner, cardiac and thoracic surgeon in the Clinic for Thoracic and Cardiovascular Surgery at the Herz- und Diabeteszentrum NRW (HDZ NRW), Bad Oeynhausen, the largest heart transplant center in Europe (Director: Prof. Dr. Jan Gummert).

Simon Kretschmar had to live with a diseased heart from birth. He suffered from a complicated congenital malformation of the heart, so-called Shone's complex, which required multiple surgery. By the age of 34 his heart was severely enlarged, while additional pulmonary hypertension had all but ceased to respond to drug therapy. He found breathing so difficult that he was no longer able to take more than one or two steps at a time.

He spent a total of 15 weeks in hospital in Bad Oeynhausen, registered with Europlant as a "high urgency" patient on the waiting list for a new heart and a new lung. Three days before his birthday he got the long awaited news: donor organs had become available.

For a heart-lung transplant, the thorax is opened with a longitudinal incision and the heart-lung machine connected. First the surgeon removes the heart, then the right lung and then the left lung. Next the donor organs are implanted inside the chest cavity. The trachea is reconnected first, followed by the right atrium, and finally the aorta.

It cannot be right that Germany has to rely on donor organs from other countries. This is the opinion of Dr. André Renner, who is in favor of an opt-out system. At a national level, North Rhine Westphalia actually brings up the rear: only 8.2 donor organs are available per 1 million inhabitants. In Bad Oeynhausen, 137 patients are currently waiting for a heart or lung transplant. The first heart-lung transplant performed in Bad Oeynhausen was in 1993. To date, 23 such interventions have been performed in total, four within the last six years.

For Simon Kretschmar, the heart-lung transplant was like a second birthday, which in the future he will be able to celebrate at home in Gevelberg with his wife Anita and son Tim-Benjamin (6). For the first time ever, he can now say that he has a healthy heart. From now on, the trained warehouse operative will be cared for regularly at the Herz- und Diabeteszentrum NRW as an outpatient. He needs to take medication every day in order to stop his body from rejecting the new organs. "I trust the doctors and nurses at the HDZ. They accompanied me through a very difficult time", Kretschmar told us. He says he was helped by his family, his faith in God and a firm belief that the time would come when he would be able to play football with his son. Life for the Kretschmar family is definitely looking up. 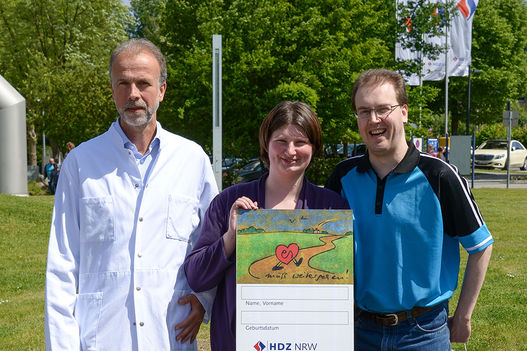