Cardiologists at the Herz- und Diabeteszentrum NRW, Bad Oeynhausen, are the first in Germany to treat cardiac arrhythmia patients with an innovative catheter technique employing special characteristics of industrial diamonds. The patients profit from greater precision and shorter intervention times.

On 28 May 2020, Prof. Dr. Philipp Sommer, Director of the Clinic for Electrophysiology/Rhythmology at the Herz- und Diabeteszentrum NRW, Bad Oeynhausen, treated a 60-year-old male patient with atrial fibrillation in the cardiac catheter laboratory using a novel CE-marked cardiac catheter system (Diamond TempTM, manufactured by: Medtronic), the first such procedure in Germany. The intervention was a so-called ablation, where cardiac tissue subject to pathological electrical impulses is sclerotized or scarred, and took 110 minutes. The patient is doing well and has already been discharged. A second patient was successfully treated on 2 June 2020.

"Compared to conventional ablation methods, the new catheter technique is far more efficient, providing fast temperature feedback from the catheter tip", Professor Sommer explained. The system is able to guarantee precise temperature control thanks to six thermal sensors in the catheter tip which work in conjunction with a special automated software. "Cardiac lesions can now be performed more precisely and significantly faster. We are able to reduce the net ablation time from previously 25-30 minutes to less than 10 minutes."

This improvement can be achieved because the diamond material used in the ablation catheter tip has a much higher conductibility than the platinum or gold catheters used in the past. It allows the ideal temperature of 50 to 60 degrees celsius not only to be reached faster, but also to be kept constant much more easily than with other materials. Six tiny sensors communicate an updated temperature reading to the generator every twenty milliseconds, which modulates its power correspondingly and cools the catheter as required.

Sommer expects patients with atrial fibrillation to particularly benefit from treatment with the new system. "To date, approximately 10 to 15 per cent of these patients later require a second or third intervention. If we could significantly reduce the recurrence rate in the future, this would be a big step forward."

Atrial fibrillation is the most common form of significant cardiac dysrhythmia, with around 1.5 million sufferers in Germany alone. In most cases the disease presents as heart palpitations, caused by overly rapid and uncoordinated movements of the chamber walls, due in turn to undirected electrical excitation of the heart. Patients additionally complain of low exercise tolerance, fatigue and disturbed sleep patterns. Atrial fibrillation is not fundamentally life-threatening, but it is connected to a higher risk of stroke. 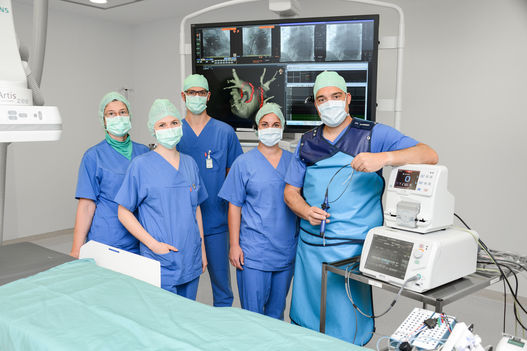