Amir and his mysterious heart

Amir is 15 years old and does not want to speak about the time he spent fleeing from Afghanistan. Asked about his family, he just shakes his head sadly. When Senior Physician Dr. Majed Kanaan first met him at the Pediatric Heart Center of the Herz- und Diabeteszentrum NRW (HDZ NRW), Bad Oeynhausen, half a year ago, Amir complained of pains in his heart and difficulties breathing. Amir had been living in a care facility in Bielefeld for three years and already spoke German very well.

"The right ventricle was enlarged. At first we suspected a malformation of the pulmonary vein", Kanaan explained. With this common congenital heart defect, blood flow from the lung to the left ventricle is blocked. But then the echocardiogram produced surprising results. The opening to the ventricle existed after all - but no blood was flowing through it. What could the explanation be?

"At our hospital we often see children and adolescents from abroad with heart defects which in Germany would have been diagnosed and treated much earlier, due to the higher level of medical care", Prof. Dr. Deniz Kececioglu, Director of the Clinic for Pediatric Cardiology and Congenital Heart Defects, said. Amir's heart problem had seemingly gone undetected until this year, when it started to affect his health as he grew bigger and bigger and his heart had more and more work to do.

State-of-the-art three-dimensional cardiac ultrasound diagnostics and gentle procedures using magnetic resonance imaging can provide very precise data about the heart, cardiac function and surrounding vessels. The hope was that this technique would now clarify the question: If Amir's blood was not flowing to the left ventricle, where was it flowing to? The pediatric cardiologists in Bad Oeynhausen established that Amir's pulmonary vein was correctly positioned and did lead from the lung to the ventricle - but that there was also a second, much larger orifice for the blood to flow into. And this one led to the liver.

This was actually good news for Amir. With a classic pulmonary vein defect, a heart operation would normally be necessary in order to provide access to the heart. The boy from Afghanistan did not have to undergo such an operation, however. In his case, Dr. Kanaan just had to make the blood flow in the right direction. The head of the HDZ NRW pediatric cardiac catheter laboratory described the procedure as follows: "We simply closed the door leading to the liver." With his experienced team in the pediatric cardiac catheter laboratory, a small umbrella was advanced from the groin using a catheter and then unfurled in front of the large orifice to close the flow of blood to the hepatic vein. Immediately after the intervention at the HDZ it was clear: Amir's blood was now flowing normally. Amir loves sport. He was very happy to hear that he would soon be able to restart his fitness training, that another visit to hospital would not be necessary, and that he did not require any medication. That is truly an affair of the heart which should be talked about. 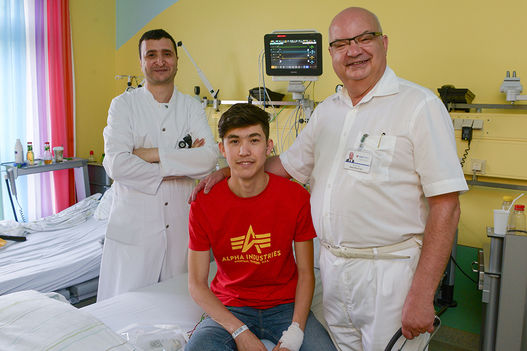